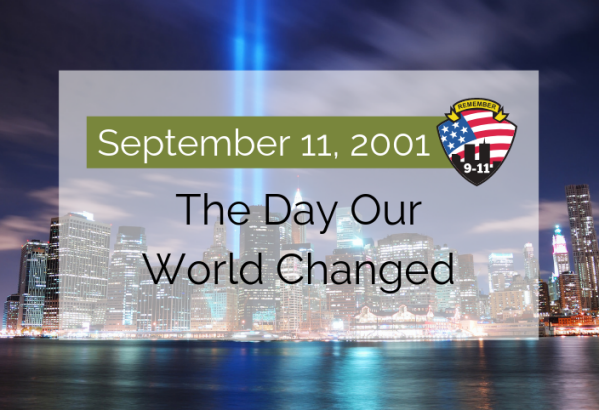 I sat in a dark room with seven or eight other people. The only light came from the illuminated floor and the projector on the wall. No one spoke. All I could hear were soft sobs, I am not sure if they were my own or the people sitting next to me. There was a photo of a man’s face being projected on one of the four walls of this intimate room. Then I could hear the voice of this young man’s mother. He was one of the almost 3,000 victims of the 9/11 attack in 2001. She spoke about how wonderful he was, about his accomplishments and his wife and children. It felt like minutes but I must have sat there for over an hour as I listened to the voices of the victims’ families and watched the images of so many faces. This was just one of the many exhibits at the 9/11 Memorial Museum located beneath the Memorial Plaza in New York City.

As the 18th anniversary of this awful event approaches, I want to spend some time reflecting about what happened on that day and what we can do today to keep the memories of these victims and heroes alive.

East Lawn Mortuaries and Cemeteries has a solemn responsibility to help memorialize, honor and pay tribute to those who have died. Even though none of the victims are buried in our cemeteries, as Americans it is our responsibility to remember them.

At 8:46 AM, five terrorists deliberately crashed American Airlines Flight 11 into the North World Trade Center. At 9:03 AM the hijackers crashed United Airlines Flight 175 into the South Tower. At 9:37 AM hijackers crashed American Airlines Flight 77 into the Pentagon, near Washington, D.C. and finally at 10:03 AM, passengers on United Airlines Flight 93 successfully launched a counterattack on hijackers aboard their plane causing it to crash in an empty field instead of hitting its target which is believed to be the White House. There were no survivors.(1) On that day 2,977 innocent men, women and children were taken away from us. They were men and women just like us; teachers, businessmen, secretaries, mothers and fathers, children, clergy and heroes.

While visiting Ground Zero earlier this year I had the honor of touring the grounds with an official tour guide, something I highly recommend. Our guide attended a middle school near the World Trade Center in 2001. Her mother had boarded an airplane that morning. Her mother was one of the lucky ones. She was rerouted to an airport in Canada where, due to the logistics of a town of population 10,000 accepting 7,000 passengers from rerouted planes, she wasn’t able to get off the plane for 28 hours. It was even several more days before flights were able to again take off and she would be reunited with her children and husband. There is actually a Broadway play Come From Away that recounts the beautiful story of the tiny town in Canada and how gracious they were to all the rerouted planes and passengers.

The story she told that left the biggest imprint on my heart was about the first official fatality of the attacks, Fire Chaplain Rev. Mychal F. Judge. He was one of many who in the wake of the attacks rushed to the aid of anyone who needed him. He was seen giving last rites to a fallen firefighter before his passing.(2) There is a vivid image that has circled its way around the world and perhaps is the reason it has made such an impression on me. After his passing five men are seen carrying the slumped over remains of Rev. Judge. This photo is forever etched in my memory. It a vivid depiction of courage, sacrifice, strength, and heroism, it is an image that represents the good in humanity, sacrificing one’s life for the redemption of others, there is no greater gift. The fire station kitty-corner to the 9/11 Memorial Museum has a beautiful memorial plaque which reads: “Dedicated to those who fell and to those who carry on.” On that plaque you see a long panoramic image of firefighters responding to the needs that day. You also see a casket lying on the ground. According to our guide, it is said that this casket represents the remains of Rev. Judge. It is crucial that not one of us forgets the sacrifices that Rev. Judge and so many others made that day.

Many of us remember exactly where we were that day, I was sitting in my 8th grade Spanish class. Our lesson plans were canceled for the day as we sat and watched the news. Those memories are still very vivid. However, our new generation of adults who are turning 18 this year were either barely infants or not even born yet and, to them, 9/11 is only something in history books and they have no recollection or memories of that day. “Now there will be children born after 9/11, who only read about that day in books. Some of them might even think the people it happened to weren’t real. But we are here to help them know that they were.” -James Laychak, Pentagon Memorial Fund President.(3)

Why is it important that we remember? “Remember the hours after September 11th when we came together as one to answer the attack against our homeland. We drew strength when our firefighters ran upstairs and risked their lives so that others might live; when rescuers rushed into the smoke and fire at the Pentagon; when the men and women on Flight 93 sacrificed themselves to save our nation’s Capital; when flags were hanging from the front porches all across America, and strangers became friends. It was the worst day we have ever seen, but it brought out the best in all of us.” -Sen. John Kerry. We must remember! We owe it to the 2,977 victims and our country.

We welcome you to share your thoughts, love, and memories of 9/11/2001 in the comments.

On September 11th, 2019 we hosted a free event where men and women affected by the tragic events of September 11th, 2001 could gather in one place for a moment of silence. The experience was truly special and to see the value it brought to the community was a treasure to us.