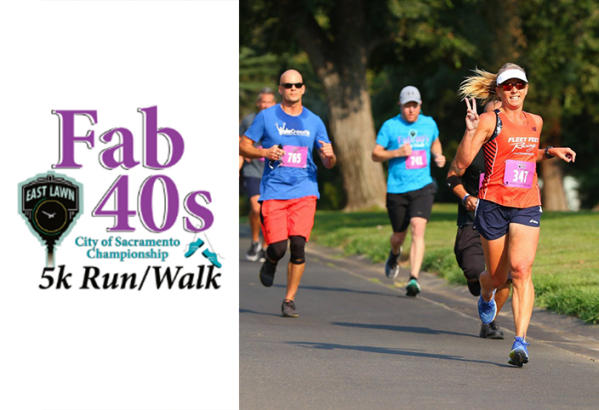 Join East Lawn In Raising Money For The Alzheimer’s Association

For twelve consecutive years, East Lawn and the Alzheimer’s Association have joined forces to create a spectacular event with all proceeds aiding in finding a cure for Alzheimer’s disease. This year marks the 12th annual Fab 40’s 5K event, located in the heart of East Sacramento. The race begins right inside our park located at 4300 Folsom Boulevard. The route continues through the fabulous forties neighborhood on 43rd and M Street before returning to East Lawn Memorial Park for the final mile loop, ending at the highest elevation point in the city of Sacramento. Inside the park, you will find fun activities for the entire family which include raffles, a photo booth, and numerous vendors and sponsors. Over the past 11 years, our sponsors have helped us raise more than $330,000 for the Alzheimer’s Association and have made this event more successful than we could have dreamed. It is a tradition that our East Lawn family hopes to continue for many years to come and one we hope will become a tradition in your family as well.

What is the Alzheimer’s Wall?

East Lawn was established in 1904 and it is deep in our roots to memorialize people. Alan Fisher, former president of East Lawn was monumental in the creation of the Alzheimer’s Memorial Wall. Below he shares the meaning behind the Wall and what led him and the Fab 40s 5K committee to engineer this one-of-a-kind tribute. Dedicated on November 1, 2011, it is the only one of its kind in the entire nation.

“We noticed from the very first run that many people had on their jerseys a handmade tag with the name and even sometimes a photo of their family member or friend. They walked and/or ran in honor of a loved one. This made the event special and also very personal to them. With this thought in mind, we wanted to do something more permanent and continual. Recognizing that the annual run would come and pass so quickly, we felt that a lasting and dignified tribute would bring comfort to the participants and awareness to the community. Hence, the Alzheimer’s Memorial Wall was initiated. It was patterned after the Viet Nam Memorial Wall. The manufacturers embraced the idea immediately as did the 5K organizers, the East Lawn board and management, and the community at large. Fittingly, the image inscribed on the wall is a tribute to the mother of one of the founding committee members

For me, the wall is personal as my mother’s name is included among those honored. During a Memorial Day program which was held some years ago near the wall, I mentioned in my remarks both the wall and my mother. The point I shared was that Alzheimer’s causes many to lose memory against their will. For the rest of us, it is imperative that we choose to remember. We must remember with gratitude those who have blessed our lives. I’ll always remember the sight of people of all ages walking and running throughout the 5K course, carrying the name of their loved on their backs, carrying their memory forever in their hearts.” – Alan Fisher

The woman whose photograph is depicted upon the cornerstone of the wall is Eileen Miller, seen alongside her two grandchildren. We recently talked to Craig Peterson, a General Manager at East Lawn, who was a key figure in the Wall that stands at East Lawn today. He was there the day the photograph was taken and shared with us the following story. It is a story that is both beautiful and heart-wrenching. The photograph above and the story that follows is a perfect depiction of this awful disease that so many are fighting to end.

“We were up against the deadline to have the wall ready by the Alzheimer’s Event and I couldn’t find a picture to put on the wall. Robyn Miller, who was on our race committee, told me she could bring her mother (who had Alzheimer’s) and her nephew to be photographed by Tony Goiburn of Oregon Memorials, the company that was making the wall. As Tony was shooting pictures, Alan Fisher decided to put Robyn’s younger nephew in the shot also. Eileen looked at her grandsons and, as she was turning to the right toward her mother who was also there that day, Tony took the shot and Eileen asked her mother ‘who are they’? The photo was perfect as it captured the ‘face’ of Alzheimer’s disease. When the memorial was unveiled, Robyn took her mother to the wall. Eileen asked who the lady was. Robyn told her ‘it’s you, mom.’ Eileen responded, ‘Oh no, that can’t be me…she’s much prettier than me.’ – Craig Peterson

Those who know someone with Alzheimer’s know this look all too well. You have likely had that experience where mom, dad, or maybe your spouse looked at you and asked: “Who are you?” This photograph, this woman, these grandchildren, and you and your family are the reasons the Alzheimer’s Association exists and they are the reason East Lawn wants to honor and support this cause.

How do I get involved?

“I alone cannot change the world, but I can cast a stone across the waters to create many ripples.” -Mother Theresa

Putting an end to Alzheimer’s is going to take a village. We invite you to join East Lawn and the Alzheimer’s Association for our 12th annual 5K on July 27th. Follow the link below for information on how to register. You are also welcome to join us as a spectator. If you wish to become a sponsor or vendor, please email Lynn Ellsworth for more information at lynne@eastlawn.com

As Alan Fisher said, “Alzheimer’s causes one to lose their memories against their will and it is up to us to keep those memories alive.” We still have room for more names to be engraved on the Alzheimer’s Memorial Wall so if you know someone who you wish to memorialize and have their name engraved on the wall, please contact Lynn Ellsworth at East Lawn Memorial Park, 916-732-2020.

Chaplain Mindi Russell officiated the dedication of the Alzheimer’s Memorial Wall back in 2011. What she said that day is something we should all remember: “Alzheimer’s robs memories, health, energy and a sense of well-being. But Alzheimer’s is not that powerful. Alzheimer’s CANNOT collapse faith, shatter hope, or stop love.” Together we will fight and together we will remember.

PrevPreviousHow Can I Help My Child Cope With Grief?
NextInside Look at The Life of a Funeral DirectorNext
Translate »