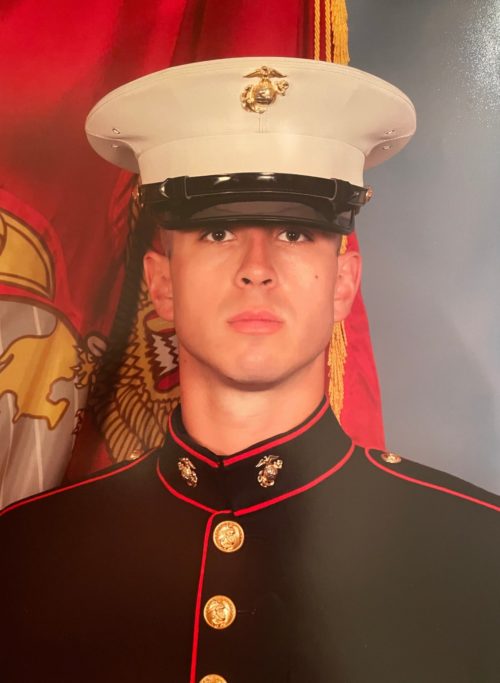 His early life was hectic moving around and changing schools. One thing Travis always looked forward to was “grandma’s week” where he and his  cousins would spend the week with their grandma Thelma. Travis would eventually settle his sophomore year in Roseville CA where he graduated  from Oakmont high school in 2001.

Travis was a Staff Sergeant in the US Marine Corps; he served two tours in Afghanistan and deployed to Spain and Italy. In the Marine Corps Travis  lived in Okinawa Japan, Jacksonville North Carolina and Oceanside,  CA.

While in the Marine Corps Travis touched the lives of many other service members, many of whom he would call his brothers. To the men and women he served alongside he will always be known as the person who saved their life, the guy who knew when you returned from a hard mission and would put a kettle of tea on and make you laugh. Everyone around him felt the love he had for them. His smile and laughter were contagious.

Travis met his wife, Briann, when he was home on recruiting assistance. They met at a bar in Folsom CA and when they introduced themselves they realized how small the world is. Travis and his uncle Don frequented Briann’s family Cafe, but somehow only when she wasn’t there. Travis visited the Cafe more often hoping to run into Briann again. He asked for her number (unknowingly) in front of her dad, something they would laugh about later. When the time came for Travis to return to A-school in NC he asked her to drive him to the airport (via text) Briann’s cousin and co-worker Julie Trevino saw the text and replied YES! They drove to his family’s house so Travis could say his goodbye. At the airport they shared their first kiss. From there the two would share a long distance relationship as he was stationed in Japan and then deployed to Afghanistan. They shared countless emails and phone calls. The two would later move to North Carolina and marry before his 2nd tour in Afghanistan. Soon after he returned Travis and Briann shared a wedding ceremony with friends and family at St. Joseph Marello church in Granite Bay and a reception in Folsom where they met. The USMC later moved them to Oceanside CA where they spent weekends at the beach and soon welcomed their first baby boy into the world (after suffering a miscarriage) life became less like a love story and more like real life as the tolls of war and military life set in. The three pushed through as Travis set off for deployment again this time to Spain. When Travis returned they reunited in NC and spent two  amazing years with friends and welcomed their second son. Another deployment, this time to Italy, which would happen 9 weeks after the birth of their second son. This would take a toll on both of them. Travis was in Italy when covid-19 took over the world and his 6 month deployment turned into 9+ months. When Travis returned home he separated from the marine corps.

His life was taken from us far too soon at the age of 39, two years after leaving the Marine Corps where he gave his all to his country.