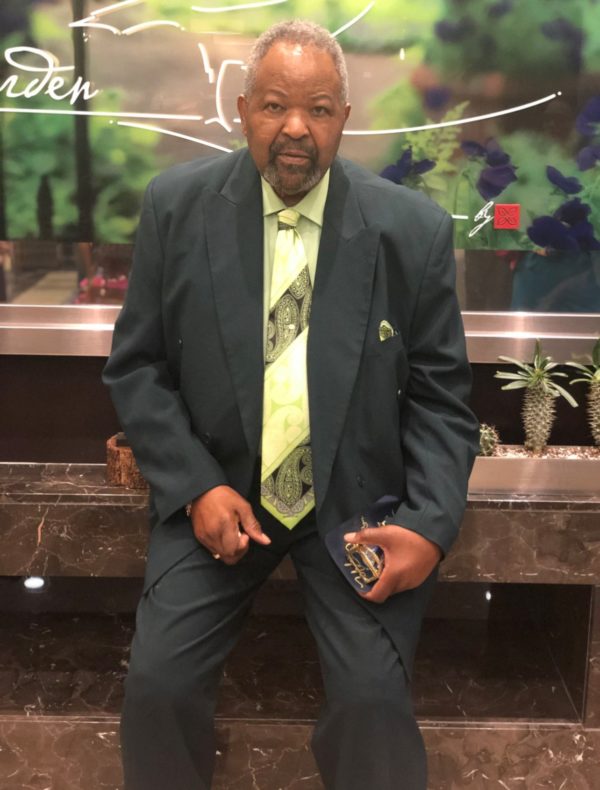 Robert Charles Scott was born on March 21, 1945 in a small unincorporated community in Newton County, Texas called Jamestown. Robert went by the nickname “Rye” and was the fourth of twelve children born to Charley and Willie Beatrice (Adams) Scott. Robert also had seven half-siblings from his father’s previous marriage. In his younger years, Robert attended school in both Jamestown and Wiergate school districts, where he developed his passion for sports and took part in basketball, football, and track and field. While in high school Robert decided to find work at a young age to assist his parents with providing for the house and caring of his younger siblings.
Robert eventually wanted a change of atmosphere and moved to Winslow, Arizona where he found work with his brother, Edward “Bubba” Scott at the Santa Fe Railroad Company. Robert would often travel from state to state working as a porter on the train. In 1964, he traveled to Gallup, New Mexico for work and while he was there was introduced to a woman by the name of Marilyn who happened to be the sister of one of his co-workers. Robert decided he couldn’t live without her and married her at the age of nineteen. Marilyn unexpectedly passed while four months pregnant with his first child, an unborn son. Shortly after the passing of Marilyn, Robert moved to California where he met and married Barbara Ann Daniels and from their union Robert Charles Scott Jr. was born in 1973. In 1980, he married Earceal Dorris and from their union he gained a step-daughter, Andrea LiNay Kidd and had his youngest daughter Kristina LaTone (Scott) Walker in 1984. In 1997, Earceal passed away from an unforeseen tragedy which left Robert completely devastated. After three previous marriages, two of which ended in tragedy that left him widowed. He then decided to live as a bachelor until he met and fell in love with Josefa Townsell in 2008.
Robert was a man of character and had an infectious personality. He was a hard worker and was known as a jack of all trades. Robert held many jobs, which included 20 years working at Dryers Ice Cream factory as a lead supervisor, to working for the city of Vallejo for over 10 years, to running and operating his own BBQ restaurant. Alongside his professional careers, Robert had many side jobs and hobbies in which he would partake in such as being a barber, landscaper, carpenter, king of dominoes and card games, captain of a champion pool league, and collector of classic cars.
Robert enjoyed being everyone’s “best friend” and would be the first to volunteer a helping hand whenever it was needed. He prided himself as a grandparent and loved the fact that in his later years he had the opportunity to live in the same household and could see and interact with them daily. Robert’s health began to decline after suffering four major heart attacks and being diagnosed with diabetes and congestive heart failure. Robert departed this life on Saturday, March 19, 2022, two days before his seventy-seventh birthday from the comfort of his home.
Robert is preceded in death by his parents, grandparents, three former wives, unborn son, three brothers, Edward “Bubba” Scott, Thamos “Lee” Scott, Larry “Rug” Scott, two brother-in-laws CW Land, and Arthur Greene, two sisters, Willie Dean “Sister” Land and Sherlyn Ann Scott, and two sister-in-laws Ella Scott and Mary Ewings Scott.
Robert is survived by his current girlfriend, Josefa Townsell, step-daughter, Andrea LiNay Kidd, son, Robert Charles Scott Jr., daughter, Kristina LaTone (Scott) Walker, son-in-law, Jovan Walker, four granddaughter’s, Na’Voj & Naiyma Cummings, Genesis & Gianna Walker, a bonus grandson, Jovan “Joey” Cummings II, six sisters, Dorothy Jean “Dot” Echoles (Thomas Earl), Eula “Mae” Scott, Lois “Yump” Marsh (James), June
“Bit” Scott, Judy “Black” Greene, Wonder “Tootsie” Scott, six sister-in-laws and seven brother in-laws through marriage, Charlotte Bell (George), Ann Dorris, Melissa Amos (Excell), Queenie Hill (Eddie), Lynette Dorris-Carter. Roger Dorris (Whitney), Dexter Dorris, god-sister, Sarah Keys, god-daughter, VaRisha Osby, nieces, nephews, cousins, and a host of distant relatives and friends.