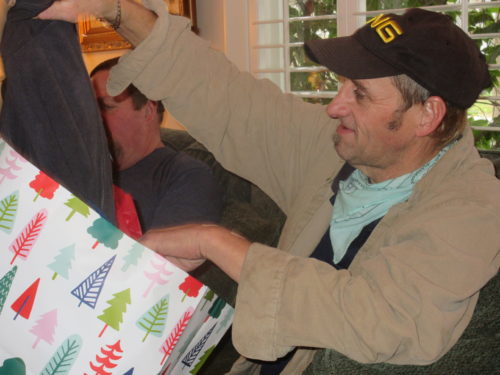 Richard was born November 12, 1963 to Nelson and Marna Lewallyn, and left this earth to be with his Lord Jesus Christ July 17, 2022. Richard grew up in Sacramento and attended Frontier Grade School, Foothill Junior High School and Foothill High School.

Rich was always very active in sports and as a young man he swam for the Foothill Farms Sea Otters and the American River Patriots. During his time in Junior High he wrestled for the school team and in High School he lettered. Not only in Baseball, but also in Tennis and Swimming. However, his great love was always his Art. The 1984 Senior Class Mascot was a Unicorn and Rich was chosen to paint the 20 foot Unicorn on the side of the school building.

Richard’s next stop was American River College after which he was off to Pasadena to attend the Art Center College of Design, where he graduated in 1988 with a Bachelor of Science in Fine Art (BSFA). Richard received many awards for his art including the 1982 “Robert Matsui” Congressional Award Winner, album cover for the XTC Group, Poster Winners for Tokyo-Osaka Arts, Pasadena Symphony, Pasadena Drug-Alcohol Abuse, and the California Music Theater.

Richard was always hard working, and as a child he mowed lawns for 10 neighbors. In high school he worked for Raley’s Super Markets, and he subsequently became a Master Butcher working for Vons, Whole Foods, and Trader Joe’s.

Richard loved life and he will always be remembered for his love of skiing, his Hobby Cat sailing and racing, his ping pong ability, and what he considered the best ever was his famous grill prepared chicken kabob’s, but what we will all cherish is the beautiful art he left behind. His paintings, mosaics, and lovely stepping stones.

Richard was preceded in death by his mother Marna.

Services will be held at East Lawn chapel, 5757 Greenback Lane, Sacramento, California, Friday, August 12, 2022, Visitation from 9:30am – 11:00am, Service will begin at 11:00am, Interment will follow the services. Any remembrances should be made to the charity of your choice.