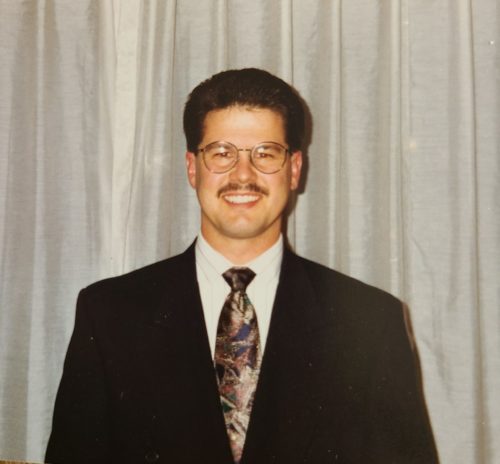 Paul Joseph Kistler died on September 6 2022 at his home in Orangevale California. Paul struggled with Lewy Body Dementia for the last 6 years.

Paul was born on August 19,1959 in San Jose California to Francis (Frank) and Betty Kistler. He was the oldest of the second set of 3 (4th of 6 children). And some say he is his mom’s favorite..shhh. He attended St John Vianney in San Jose for 1-8 th grade. While he was at St John Vianney he ran track and got the nickname PK Legs. For high school Paul attended freshman year at Mt Pleasant where he tried his hand at swimming. This was not his sport coming in last in his first race. However, Paul never gave up and became a strong swimmer. He went to Pioneer his sophomore and junior year. He then landed at Gunderson to be in the first graduating class of 1977.

Paul met his wife Corrine Nava on the last day of his senior year. When he asked her to be the first to sign his yearbook. The pick up line worked so well that they were married 2 years later on June 30 1979. They have 2 children Joseph and Brianne and 6 grandchildren. Paul loves his family and spent as much time as possible with them. He has always been so proud of both Joe and Bre. He supported them in all their sports. He was the first to volunteer to hang out with his grandchildren. He also loved bike riding with Joe and going on walks with Bre.

Paul worked at PW supermarket, Nob Hill Foods, Coors Brewing Co., and retired from Svenhard’s Swedish Bakery. He made many friends along the way. Paul was liked by everyone he met. Paul was always trying new adventures. He partnered with a couple of friends to start an import business. He traveled to Holland and Chicago with his good friend Bas to sell stroopwafels. Paul, Corrine, Joe and Bre opened Corrina’s dessert and coffee cafe in Roseville. It became a neighborhood hang out and sometimes we would have small outdoor concerts.

One of Paul’s greatest pleasures was helping with the music at St Joseph Marello when it was in the Cavitt gym. He would set-up the equipment every Saturday and take it down every Sunday. He was honored and proud to be a Knights of Columbus. He even served one year as the Grand Knight.

Paul loved the outdoors and staying in shape. He did landscape for fun and as a side business. He completed a sprint triathlon. And ran many 10ks with his good friend Marty. He would walk daily getting more then 20k steps per day.