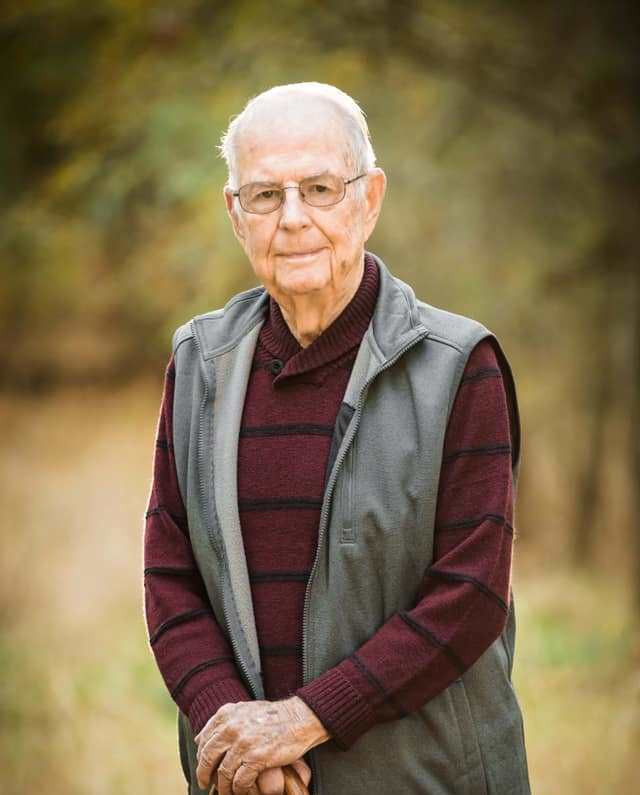 Olen was born to Luther William Page, Jr. and Amy Ackley Page on September 13, 1926 in Enid, Oklahoma. He lived in this area through his high school years, graduating from the 12th grade in Driftwood, Oklahoma in 1944. He entered the United States Navy on October 17, 1944. Olen married Sylvia Thompson on April 9, 1946, but they didn’t really begin their married life together until July of 1946.

Olen was discharged honorably from the Navy on July 10, 1946 as Seaman 1st Class, after serving for 1 year, 10 months, and 5 days.  He served on the U.S.S. Aristaeus ARB1. RB stands for Repair Barge. The ship would come along side other ships that had suffered battle damage and provide repairs. He served during the Battle of Okinawa amongst an allied fleet of 1500 naval craft. Following the war, his ship returned to the United States and sailed under the Golden Gate Bridge and into storage near Benicia, California. In September of 2020 instead of going under the Golden Gate Bridge, we were able to drive him over the Golden Gate Bridge, something he had wanted to do for 75 years.

Olen had many jobs after leaving the Navy. He resurfaced roads in Alva, Oklahoma; he worked for a construction company helping tear down a Japanese prisoner of war camp just outside of town; he worked for the Cherokee Power Plant for about 2 years. His next job was in Neodesha, Kansas, bailing alfalfa for his father-in-law; then working for W.J. Small Alfalfa Dehydrating Company. While working for this company a crew of men was sent to Windsor, Colorado to build three alfalfa-dehydrating mills for that area. Olen left in October for Windsor, Colorado and in April 1950 he moved his family to live in Windsor, Colorado. In December 1950 Olen got a call about a job opportunity to work for Phillips Petroleum Company in La Junta, Colorado. He took the job and moved his family to La Junta that same month. On August 1, 1985, Olen retired from Phillips Petroleum Pipeline Company after 35 years of service. In 1989 Olen and Sylvia moved to Greeley, Colorado for their retirement years. On July 20, 2019 Olen left Greeley to temporarily stay with his granddaughter Shawna Page Furman in McGregor, Texas. That November he began his new adventure living in Sacramento, California with daughter Sandra and her husband Rod. Olen passed away peacefully at home.

Olen was a quiet man, soft spoken, very wise, and well respected and liked by all who knew him. He was a man who didn’t have a lot to say, but when he did speak, it was a good idea to listen to him. He had a quick wit that often surprised people. He loved and was very devoted to his faith, going to church, serving in the church when he was able, fishing, gardening, putting together puzzles, family gatherings, playing dominoes and Rummikub, watching Denver Broncos football, Colorado Rockies Baseball, reading westerns, and watching John Wayne movies.

Olen is preceded in death by his wife of 72 years, and a son Steven. He is survived by his oldest son Ellis Craig Page of Fort Collins, Colorado; and daughter Sandra Page Wittler, Sacramento, California; 3 grandchildren; and 6 great-grandchildren.

Funeral services for Olen will be October 13, 2020 at Peacock-Larson Funeral Home. The viewing will be from 9:00-10:30 a.m. with the Celebration of Life Service beginning at 10:30 a.m. Olen will be buried in Fairview Cemetery, La Junta, Colorado. In lieu of flowers please make a donation in honor of Olen to the Mountain States Children’s Home msch.org.