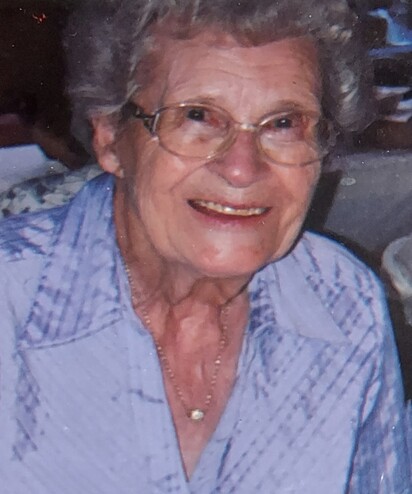 Marian Howard (Childs) AKA Grandma Fudge, 94, of Sacramento, CA, previously of Elk Grove, CA, peacefully passed away on April 20, 2022.
Marian was born in San Jose, CA on June 23, 1927 to Elenore Laura Norton Childs and Arthur Lewis Childs. She attended Melrose Methodist Episcopal Primary School, Federated Church Junior School of Santa Clara and Santa Clara Union High School (class of 1945). While in high school she was a part of the Job’s Daughters Drill team in 1943 and 1944.
A few years later she settled down and married William W. Howard on June 22, 1947 and had five children. She first worked for JC Penny’s and then Montgomery Wards for 35 years as a receiving clerk. After years of retirement she worked at one of her favorite stores, The Dollar Tree. She enjoyed playing Bunco with all her friends, attending her widows support meetings and dinners, the movie theater, eating at Applebee’s and Mimi’s Café, going to yard sales, getting her hair done, collecting bells and her 49ers. She also had a very special love interest, George Strait! She loved his music and loved being able to attend several of his concerts.
Marian is survived by her daughters Kathleen (Brad), Mary (Chuck) and son William (Kelly), 9 Grandchildren, 22 Great Grandchildren and 11 Great Great Grandchildren. She was predeceased by her husband William W. Howard (1999), daughter Patricia A. Townsend (2016) and son Johnny Howard (1966).
Services will be held on Friday, June 3, 2022 at 10:00am at East Lawn Elk Grove Memorial Park & Mortuary located at 9189 E. Stockton Blvd., Elk Grove, CA 95624.