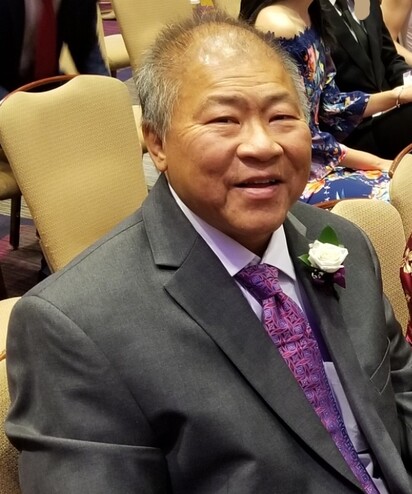 Lim Soo Fong was born on November 10th 1954 to Parents John and Judy Fong in Peoria Illinois. Lim grew up being the first of 9 children and the first born son of the family. At a very young age he found himself working with his Parents and Grandparents working in the family restaurant business, “The Bamboo Inn” Chinese restaurant. It was here that he learned the values behind hard work and entrepreneurship. As he grew older he was taught the importance of education and freedom to do so, and eventually found his way to college where he attended California Polytechnic State University with his brother Jain. They were roommates together and lived on Marsh Street which was the old French Jospin in San Luis Obispo. Lim and the other “Marsh Streeter’s” were active in the Chinese Students Association. In 1978 he would go on to earn his Bachelor of Science degree in Food Science. It was also at Cal Poly and through the Chinese Students association where he met his loving wife Ann and his first son Woui “Patrick”Wong. Lim was always known as “Mother Goose” by his friends, as after having so many brothers and sisters he was accustomed to taking care of babies and small children. Lim loved his brothers
and sisters, Jain, Sonny, Jackie, Sam, Bill, Joy, Jone, and Julia. It was not always easy to have such a large family and especially one that had to live and work together, but Lim loved them all the same. Later after college, Lim found his first job in the food science industry working for Contadina Foods where he worked for a short period of time. Eventually by 1978 Lim, Ann, and Woui moved to Sacramento with the rest of the family where they settled down and had Goukthlu “Peter” Fong, Lim’s second son. Lim was very proud to have two boys, who he enjoyed teaching Gung Fu and passing down the entrepreneurial lessons of his forefathers. Shortly after Goukthlu was born in 1985, In 1986 he would then go on to open an Appraisal and business of his own where he was a Licensed Certified General Appraiser. He would then go on to open a series of real estate and mortgage related businesses and later teach his sons the family businesses. Lim was always a great businessman and knew how to wheel and deal with the best of them, and often times found himself working multiple businesses and always looking at the horizon for the next opportunity. However, his legacy was and always will be his two boys who he loved dearly. Lim’s way of connecting to his boys was always through what he could teach them as it was his way of showing his love by giving them opportunity that perhaps he and those before him never had. Many knew him in different forms and fashions, from businesses to the racquetball court, as racquetball was his favorite sport to play. Lim also loved all of his pets who he considered family as he would also refer to as “Fur-people” starting with Siggy, Petey, Mue, Beamer, Shreck, Nanook, Blue, Tia and Krypto. Many also knew Lim by different names as he had many knick-names his friends and colleagues would go by, but no matter what name you knew him by, there will never be another beloved Lim Soo Fong, the businessman, martial artist, and father who was peacefully called home by god on July 19th 2022. Lim will be missed by many, but as he would tell you while he was alive, that he is never truly gone as long as we remember and carry him on in our hearts and minds.

Services will be streamed live

A Funeral Ceremony will be Held Friday, August 5th, 2pm, in the chapel at East Lawn Elk Grove.