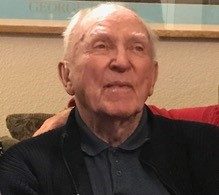 Another member of the Greatest Generation has passed on October 27, 2020.  Joseph Daniel McConnell was born to Frances and Daniel McConnell on September 30, 1922, in Slippery Rock, Pennsylvania.  He was preceded in death by his parents and his sister Frances.  He was married to Estelle Roberts for 42 years, sharing many adventures and raising four children together.  He lovingly cared for her during a lengthy illness until her death in 1990.  In 1995, he married Martha Frazier.  They enjoyed traveling, taking trips to the East Coast and Europe.  He again was a wonderful caretaker to Martha until her death in 2017.  Joseph served honorably in the Army Air Corps (later the Air Force) as part of the 801st/492nd Bombardment Group during WWII.  He was part of a group, attached to the OSS,  known as the Carpetbaggers who flew weapons, supplies and men into occupied Europe.  After the war, Joseph obtained a degree in engineering from Carnegie Technical College.  He worked for a variety of aircraft companies, as well as the U. S. Navy, in Michigan, New York and Maryland.  In 1958, Joseph and his family moved to California where he began a 32-year career at Aerojet, which included working on the space shuttle program.  He began playing bridge with a group at work that continued into retirement for many years.  He was always active, enjoying his weekly games of golf and working out at the gym until well into his nineties.  Joseph was extremely handy and was known to be able to fix anything.  He was an engaged parent, participating in numerous activities including fishing and camping trips, and coaching Little League.  He was extremely competitive and taught his children and grandchildren to play by the rules and play to win which resulted in very lively games, especially croquet and ping pong.

He leaves behind four children, Marguerite Monahan (Steve Fretwell), Kathleen Rose (Randy), Richard McConnell and Erik McConnell (Chuck Bosler).  He was extremely proud of his eight grandchildren, Michelle Dearth (James), Katie Apple (Marc), Conor Rose (Amber),  Kelly Carey (John), Alex Lovett, Joseph McConnell II, William McConnell and Madison McConnell and his great-grandchild Ella Dearth.  He will be greatly missed by all those who knew and loved him.  Funeral arrangements will be handled by East Lawn Cemetery at 5757 Greenback Lane, Sacramento.  Burial will be at Sacramento Valley National Cemetery in Dixon. Due to current circumstances, services will be for immediate family only.  Remembrances may be sent to the American Lung Association.